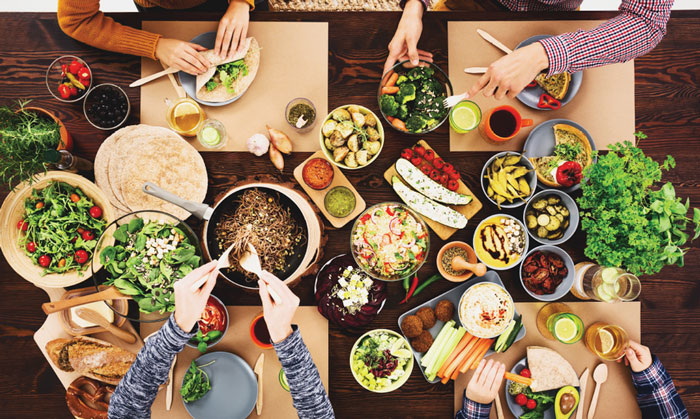 A great article published in Out & About Wilmington and written by Leeann Wallett on August 31, 2020. This article has a few quotes from Meredith Boas about veganism and it’s a great read.

Veganism is gaining momentum, but is it for you? Here’s a beginner’s guide.

From Burger King’s Impossible Whopper to the Dunkin’ Beyond Sausage Sandwich, plant-based versions of popular fast foods are popping up left and right. These options have gained momentum as consumers want to eat healthier. For those preferring such a diet, here’s a look into the health and environmental benefits of plant-based food and local restaurants catering to vegans.

The terms “vegan” and “plant-based” are so often used interchangeably that it’s important to define each before moving forward:

Vegan— A diet and lifestyle that excludes all animal by-products. This includes the elimination of meat, eggs, dairy, seafood and honey as well as not wearing fur, leather, wool, down, or using cosmetics or chemical products tested on animals.

Vegetarian— A diet that excludes all meat, but you may still eat eggs, dairy or seafood. Dieters may still wear or use animal by-products.

Plant-Based— A diet consisting primarily of foods derived from plants, which can include fruits, vegetables, nuts, grains, seeds and legumes. A plant-based diet is not always vegetarian since many people on this diet continue to eat and use animal by-products but in smaller quantities. The word “flexitarian” can be another way to describe this diet.

Whole Food Plant-Based (WFPB)— A diet that distinguishes itself as being more nutritious since it relies mostly on whole plant-based foods and not processed plant-based foods—e.g., veggie burgers.

For consistency, I will use the term “vegan” to mean diet, unless otherwise noted.

The word “vegan” may conjure images of granola-eating hippies or trendy millennials, but as Mrs. Robino’s manager and great-granddaughter, Andrea Wakefield, has seen with those seeking the vegan menu, customers come from “all ages, races and types of people.”

Wakefield saw the trend toward vegan-friendly options at the food conference she attends every year. “Two years ago the percentage of vendors catering to veganism was two percent. This past year it was more like 25 percent,” she says. In addition to the heavy-hitters like Impossible Burgers and Beyond Meats, “there were also vegan seafood and sushi options.”

While meatless alternatives like veggie patties and sausages are all the rage, going vegan is about making better food choices by eating whole, plant-based foods and eliminating animal products.

The Impact of Eating Vegan

“Eating healthy shouldn’t be difficult or intimidating,” says Jason Aviles, project director of Wilmington Green Box and co-owner of Green Box Kitchen. “We want to meet people where they are, to create a safe space for them to try new things.”

Wilmington Green Box began in 2016 as a way to provide urban communities access to fresh produce. It trains and employs at-risk teens to produce and sell cold-pressed juices and fresh-cut fruit in Wilmington neighborhoods that are “food deserts” or places devoid of any affordable, fresh food.

What emerged from this effort was Green Box Kitchen, a fast-casual restaurant on the corner of Fourth and Market streets that serves scratch-made, nutrient-dense whole foods, fresh smoothies and cold-pressed juice.

The vegan lifestyle’s strict adherence to no animal by-products can be a difficult transition since it covers many of our favorite comfort foods, like dairy, cheese, eggs and meat, and products like makeup and leather goods.

Regardless of your animal rights stance, new research published in the journal Science shows that eliminating meat and dairy from your diet is not only good for your health but also for the environment.

Lead researcher Joseph Poore, from the University of Oxford, states that “a vegan diet is probably the single biggest way to reduce your impact on planet Earth, not just greenhouse gases, but global acidification, eutrophication, land use and water use.”

Other research from Translational Psychiatry shows that a plant-based diet that excludes animal products has shown to decrease LDL (bad) cholesterol and reduce the risk of heart disease.

Diane Callaway, owner of Life is Delicious and organizer of the annual Delaware Veg-Fest, lost both of her parents to degenerative diseases at a young age. After her loss, she devoted her life to educating, training and supporting underserved communities about the power of nutrition.

Callaway found that removing the “-isms” from her vernacular made the subject of nutrition much more approachable for those seeking her help.

she says. “My approach is to show people what they can still eat with modifications, rather than make a list of things they cannot eat.”

Callaway created the Veg-Fest out of this love of food and desire to educate the wider community about healthier food choices. The free festival is set for Saturday, Sept. 19, at Glasgow Park from 11 a.m. to 6 p.m.

Meredith S.K. Boas became vegan the day before Thanksgiving in 2016. Her older sister, an avid runner, had already embraced the journey to veganism for its touted health benefits.

“After she showed me some informational videos on the meat, egg and dairy industries, I felt that if I couldn’t even watch the process, I had no right to consume the product,” says Boas.

“She showed me the modern ease of transitioning into a vegan lifestyle,”  which translates to Boas’ clothes, health products, household goods and even craft supplies.

Boas is the creative director and owner of Grunge Muffin Designs, a design studio, so all of her materials are vegan-friendly and cruelty-free. For example, when creating fiber pieces, her yarn is a cotton blend that doesn’t use animal by-products like wool.

While transitioning to eating vegan, Boas was surprised at the ease of finding alternatives to many of her favorite foods. “Not all vegan food is created equal, but through trial and error you do find substitutions where you don’t compromise on taste, texture, or satisfaction,” she says.

Vegan cooking and baking is a matter of finding substitutes for common ingredients and does not need to be intimidating. Grocery stores like Trader Joe’s, Newark Natural Foods, Target, Whole Foods and Wegmans have a wide variety when it comes to plant-based and vegan products. Here are some simple swaps and substitutions to common ingredients:

Milk:  Plant-based milks are easy to find and can include almond, cashew, coconut, flax, hemp, rice, oat, pea and soy.

”Becoming vegan taught me how to cook,” says Jamie Magee, a software consultant who began his journey back in 2005, when he became vegetarian. He went full vegan in 2011.

“I missed cheese,” says Magee. “As a vegetarian, cheese becomes a major food group, so it took a couple of weeks for my palette to change.”

Once he became strictly vegan, Magee lost all cravings for cheese and other animal products and felt he had “more energy and focus.”

A wrestler in high school, Magee is now a regular weight lifter, and he believes he’s the strongest he’s ever been.

One misconception of eating a plant-based diet is that you don’t get enough protein. The Netflix documentary Game Changers, produced by James Cameron (director of Avatar and Titanic), Arnold Schwarzenegger and Jackie Chan, has helped to dispel this myth. It documents elite athletes and other cultural icons who have benefitted from plant-based diets while still being able to perform at the highest levels of their sport or field.

And though you will need to “eat a higher volume of plant-based foods as a vegan,” says Magee, many of the calories come from quality fats like nuts, seeds and avocados. “You can get the same amount of protein as a steak, if you opt for nuts, beans and rice, all while cutting fat and calories.”

When cooking vegan meals, cuisines from Mexico, Asia and India are “easily adaptable for vegans since meats and cheeses can be left out or easily substituted,” says Boas.

Don’t feel like cooking? Below, we’ve listed a handful of all-vegan and vegan-friendly restaurants ready to serve you.

Here’s a list of restaurants and stores that offer plant-based and/or vegan options:

Please consult your healthcare professional before starting this or any diet. And be aware that some restaurants cook or fry vegan options on or in the same equipment used with meat products.

Category: In Other NewsBy MeredithSeptember 11, 2020

Meredith is the Creative Director of Grunge Muffin Designs, as well as an award-winning graphic artist and illustrator. Her focus is on branding and graphic design, arts advocacy, and community engagement through the arts. Meredith has a bachelor's degree in Integrated Arts, and four associate degrees in related studies.